On July 8th 2010 LeBron James 'took his talents' to South Beach, and joined The Miami Heat and thus, a villain was born.  In one of the most anticipated free-agency's of all time, LeBron shook the NBA world by teaming up with superstars Dwayne Wade and Chris Bosh.

Well, now that The Miami Heat have won a championship, is LeBron still the villain of the NBA?

First let's take a look at LeBron's numbers for the year:

LeBron won the regular season MVP and the finals MVP while averaging (rounded): 30PPG, 10RPG and 2steals while shooting 50% from the field during the playoffs, a truly amazing feat.  Regardless of his historic numbers, it would appear that LeBron is still the villain of the NBA.

Sure, he did put up spectacular numbers on a consistent basis and yes he did win that elusive championship.  But Cleveland fans still hate LeBron and some NBA fans (unfortunately) are sat with their arms folded waiting for that 7th championship which  LeBron jokingly eluded to on stage (not 1, not 2, not 3…)

One would hope that after this championship the media would turn their attention to other superstars who have come up short in recent years; some even leaving their original team in pursuit of a championship *cough* Carmelo Anthony *cough*.  However, the fact still remains: the media LOVE to 'hate' on LeBron, it's what sells.  I'm quite sure that at the first bad game LeBron has or first clutch shot that he bricks in the upcoming NBA season Skip Bayless will appear like a Genie out of a lamp on ESPN First take and reveal to us all the breaking news that LeBron doesn't have the "clutch gene" and that Kwame Brown is a better player than LeBron.

However, let's not drop the blame from LeBron completely.  His antics throughout his first season at The Heat were questionable at times.  After all, no-one forced him to go on stage and say "...once the game start, its gonna be easy".  And most NBA fans will clearly remember him punching Dwayne Wade in a mocking style in game 2 of the 2011 NBA Finals after Wade made a 3 point shot that extended The Heat's 4th quarter lead to 16 (before Dallas made a comeback and won the game). 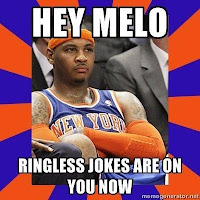 Personally, I think LeBron has received unjust criticism.  Every player has flaws and areas in which they can improve their game (his being his clutch shooting and post up abilities).  However LeBron has been constantly under the microscope since he joined The Heat and we've seen him fall to the pressure of the media.  Most noticeably after losing in the NBA finals in 2011.  Many felt that he needed to improve his post game and as a consequence he worked with Hakeem Olajuwon for the first time during the summer.

So in some ways, LeBron is to blame for the title that his name now bears.

In one way its a shame to see a single player 'bashed' by the media and by fans so much.  Many may feel that he deserved it but a vast majority of people are probably sick of the constant criticism and want the NBA to return to 'normal'.

It would seem that LeBron's single championship is enough for him to erase the "championship-less" jokes (well, most of them) that were made for so long.  We can look forward to hearing the title "King James" without shortly hearing the remark "What's a King with no rings".  However, I'm quite sure that the 'haters' will be back, continuing their ridicule and making jokes about his "clutch abilities"; his hairline and so on and so forth.  I guess we as NBA fans just have to live with that. 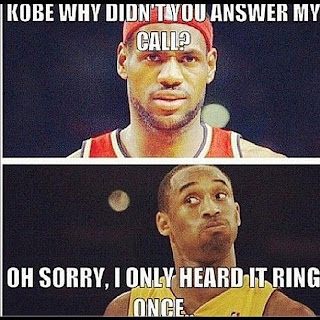 Questions are being asked about other superstars such as Carmelo Anthony regarding their short-comings in recent years, but it would appear that LeBron is still the 'villain' of the NBA and is far from clearing his name of all criticism.