The Truth About Kobe Bryant

Kobe Bryant is one of the most talked about NBA players of all time and has arguably been the face of the NBA for several years.  One cannot deny that he is certainly one of the best players to have ever picked up a basketball,but I feel that some of his accomplishments are not put into perspective.  Before I start I'd like to say that Kobe is personally one of my favourite players to watch and has been since I started watching the NBA.  He is an all time great, first ballot hall of famer and an incredible player.

5 Rings
One of the arguments when it pertains to Kobe being the "G.O.A.T" (greatest of all time) or when ranking him on an all time scale  is the 5 rings that he has. Yes, Kobe Bryant has 5 championship rings to his name, but what does this actually mean?

Bill Russell has 11 rings, Robert Horry has 7 rings and Michael Jordan has 6 rings; does this mean that both Russell and Horry are better players than Jordan? Of course not, why, because unlike Russell and Horry, Jordan was the main man on each of those championship teams hence why he has 6 finals MVPs. (Note that the finals MVP was not around in Bill Russell's day however he still wasn't the number one player on all 11 championships)

First of all, basketball is a team game and to rank someone based on the number of championships they have won is a very basic way of looking at things.

Of Kobe's 5 championships he has 2 finals MVPs (2009&2010). Shaquille O'neal was the main man on on the first three championship teams and as a consequence he has 3Finals MVPs. This is not to say that Kobe was useless throughout the first 3 championships. It is just to say that he was the second option, the side-kick and therefore to label him as the leader of all 5 championships (which is something that many main stream media organizations such as Sport’s Illustrated do) is clearly not true. 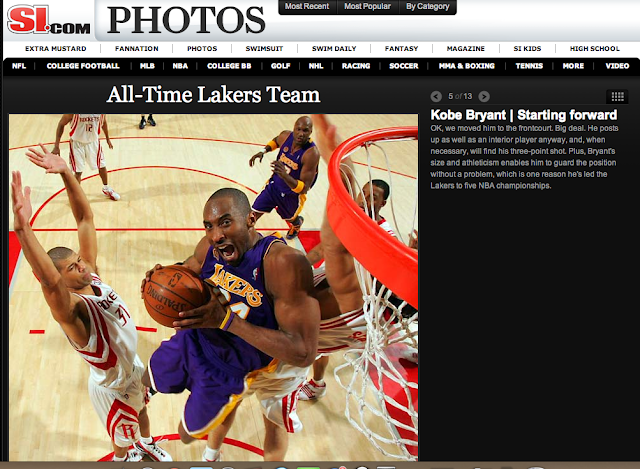 Fans accept this when talking about Jordan and Pippen, no one says 'oh well Pippen has 6 rings therefore he's better than Kobe' because they clearly understand that Pippen was the side-kick for all six championships. However for some reason this isn't the case when it pertains to Kobe.

81 points and Scoring
Often when I ask a Laker fan who they think the greatest scorer of all time is they reply with "Kobe of course."  When I further question them the first response is "he scored 81 points."

This is probably the most illogical response possible.  Kobe's 81 points against the Raptors (who were the worst defensive team in the NBA at the time) was the second highest single scoring total in NBA history by an individual. Surely using that logic then Wilt Chamberlain at 100 points in a game would make him the best scorer ever?  Using the same logic would mean that David Thompson (career high 73 points) and Elgin Balyor (career high 71 points) are better scorers than Michael Jordan (career high 69 points).  Using one, single game as evidence as to someone being the best scorer of all time is extremely shallow!

There's no doubt that Kobe has been a prolific scorer for much of his NBA career, however,I feel that the negatives are drastically overlooked when people and the media talk about his scoring.  Kobe is currently 11th all time on the all time points per game list (25.51) (accurate as of Monday 11th March 2013) however for his career he is only shooting .454% from the field. In fact, he's never shot above 48% for a season, which is quite poor.

When you compare his FG% to other elite scorers; both past and present, it's shocking to see how low is FG% is.  Additionally more than 60% of Bryant’s 50 point games have come against bottom 10 defenses in the league. While Kobe is to be commended for taking advantage against poor teams it is important to put these 50-point out bursts into perspective when comparing them to other player’s 50-point games.

To give you a quick summary regarding the negatives of Kobe’s shooting/ scoring here are some of records that Kobe Bryant holds:

Bet you didn't know that huh?

From the above records its clear that while Bryant scores the ball a lot, he has done so at an inefficient rate.

Often the media will only focus on one side of the scoring; the point total.  In recent years Kobe has passed up some of the all time greats such as Shaquille O’Neal, Moses Malone and Julius Erwing when it pertains to all time total points but has done so shooting a lower percentage.  In fact on the day Kobe passed Jordan for all time total missed shots he shot 3 for 21 against the Wizards, ironic isn’t it?

Statistically speaking Kobe is predicted to pass Michael Jordan in all time total points in the near future (most likely during the 2013-2014 season) and I know that the media and Kobe fans globally will be stating that this alone makes him a better scorer than Michael Jordan.

While Kobe may pass Jordan in all time total points it’s important to recognize that Kobe has already played approximately 200 games more than Jordan and has yet to reach his point total while shooting approximately 4% lower from the field.  Additionally, by the time he passes Jordan in all time total points he will move into number 1 on the all time missed shot list while only being number 3 in total points made.  Not to mention the numerous other records that Jordan will still hold scoring wise.

Clutch Myth
Another myth that lives when it comes to Kobe is that he's 'clutch', he delivers the game winning shot when it's needed on a regular basis.  I hate to burst your bubble but this simply isn't true.  In fact, it's quite the opposite. Although there are varying definitions as to what 'clutch' is, it's widely accepted that a clutch shot is within the last 24 seconds of the game when your team is tied or down by 1,2 or 3 points.

Compared to some of the superstars of the NBA both past and present: 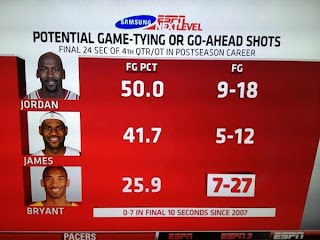 The Media’s Portrayal
I’ve talked a lot about how the media portrays Kobe and how they compare him to other all time greats such as Jordan; so let’s take a look at one such example.

Please note that the video compilation is fan made but I will be focusing on the audio that is spoken by various analysts and reporters from the main stream sports media.

“At the time of their 33rd birthday, is it Kobe that is more accomplished –outpacing Jordan in points, all star appearances and championships”

Let’s start off with the opening statement comparing Jordan and Kobe at their 33rd birthday. Is this a fair thing to do? Jordan entered the league at 21 years old where as Kobe entered the league at 18 years old.  Therefore meaning that Kobe has already played 3 more seasons in the NBA than Jordan.  Then we take into consideration that Jordan retired at the end of the 93 season and didn’t come back until the last 15 games of the 95-96 season, so already we can see that Kobe has almost a five year advantage over Jordan when comparing them.

Furthermore let’s look at the breakdown of the analysis. They have chosen to use only three categories to compare Kobe and Jordan; points, all star appearances and championships. As I stated earlier in this article Kobe has been a very inefficient scorer throughout his career and this clearly was not taken into consideration when making the claim.  Yes, he had more total points but he has played 5 years longer and has shot with a lower percentage than Jordan has for that duration. Furthermore the analyst goes on to mention all-star game appearances.  Since when did appearances in a exhibition game determine how great they were? Using that logic Kareem is the greatest of all time because he has the most all-star game appearances (19). Lastly, the analyst states that Kobe has more championships than Jordan.  As I covered previously in the article championships are a team achievement. It’s interesting to note that the analyst did not mention the number of finals MVPs that both players had at their respective ages, why do you think that is?

Let’s look at the second statement:

Conclusion
Some of the information presented in this article may come as a shock to some of you, especially the young generation.  The article was not meant to come across as bashing or ‘hating’ on Kobe. He’s an all time great, a first ballot hall of Famer and one of the best shooting guards to ever play the game of basketball.  He is one of my all time favourite players and I have loved watching his career.

I wrote this article to dispel some of the myths and lies that are told about him. I have no personal problem with Kobe Bryant however when the media tells blatant lies about a player or twists the truth as I have just shown you I see fit to correct them.  It’s amazing the amount of people that think Kobe is the greatest of all time all because ESPN presented them with 3 or 4 facts and a false statement.  Hopefully this article has shed some light on Kobe Bryant’s career.

http://www.nba.com/statistics/default_all_time_leaders/AllTimeLeadersPTSQuery.html?topic=4&stat=1
Posted by Unknown at 09:51

Follow by E-mail to receive notifications of new articles